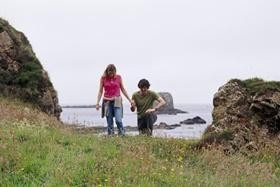 The circuit of Malin will take you past the Radio Station; built in 1910, and round the coast to Banba’s crown, the most northerly tip of Ireland. (Banba was one of the mythical queens of Ireland). “The Tower” was built in 1905 and used as a Lloyds Signal Station. Natural attractions along the cliff edge include a spectacular subterranean cavern know as “Hell’s Hole” and natural arch call the “Devils Bridge”. On a good day the Scottish coast line and nearby Inishrahall Island are visible.

Above Banba’s Crown to the east lies Ballyhillion beach, a unique raised beach system of international scientific importance. The very distinct shorelines show the changing relationship between the sea and the land from the time the glaciers began to melt, some 15,000 years ago. At that time County Donegal was depressed by the weight of an immense ice sheet, so the level of the sea, relative to today’s shore, was up to 80 feet higher than today.